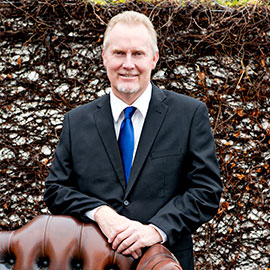 Guy is a Director and head of the firm’s Liquor, Municipal and Labour Law Departments. In addition, he is a Conveyancer and a Notary Public.

He joined the firm as an Associate in 1989 and become a Director in 1990. Guy strongly believes that attracting and holding clients is key due to his view that long term relationships are the preferred relationships.

During his career he has provided valuable input to Government regarding liquor legislation at both National and Provincial levels. He is respected and acknowledged as an authority on Liquor Law and his reputation extends beyond the boundaries of the Eastern Cape Province.

Guy has also developed a strong commercial and corporate law client base. He has extensive knowledge in aspects on Municipal Law such as rezoning applications and subdivision applications.

Guy has an engaging personality and is a people’s person and has the ability to instil confidence in his clients.